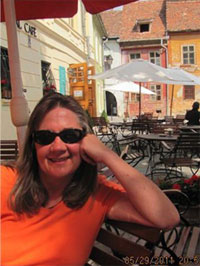 Kathleen Dumitrescu has lived in Midtown for 27 years. In 1987, she and her husband Gabriel lived in an apartment at Piedmont Park and 12th street; In time she made it South to the SE corner of Myrtle and 5th where she spends an inordinate amount of time in her gardens and applying duct tape to parts of her house that appear to be ready to fall off.

In the 1990’s, Kathleen served two terms on the MNA Board of directors.  In 2013 she got back on the board because she could no longer remember what she did on her first two terms in the 1990s.

In her 2013 to 15 term on the MNA Board, Kathleen worked with neighbors to organize a Trees Atlanta Midtown planting.   Last spring, Kathleen and Greg Moran launched the Midtown Open Garden Day, a garden tour with no tickets.  It was a big success in spite of the fact that we launched on a day of near biblical proportion rainstorms.  We are in the starting to ramp up for this year’s open garden day and have decided that we already had our share of rain for the next 50 years so it should be dry.

Kathleen and her husband, Gabriel, have two children: Elijah who is a Grady senior and can make it from Myrtle street to Grady High in 4 minutes on his long board, and Magda, a freshman at Grady.  In an obvious collapse of the rational thought process, the Dumitrescu family organized and hosted the annual Midtown Parents Halloween Pizza and Trick or Treat Party in their back yard for 8 years.  This past Halloween we moved the party to Penn hoping to make it a street festival in the future.  In an interesting wild-life aside; Kathleen has found the Halloween Party generally coincides with the annual fall vermin visit, when her furry four footed friends gnaw their way into her house for the chance to taste test her rat poison (which she is fairly sure that they view as after dinner mints.)

Kathleen would like to serve another term on the board and hopes that you will vote for her, or, in the alternative, do all the work on the Board so that she can go back to working in the yard and throwing heavy objects at the squirrels and various other rodents that she is feuding with.