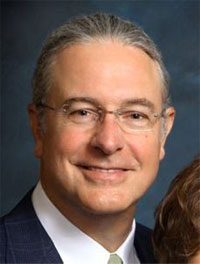 Howell is an “almost native” Atlantan, having moved here when he was one year old.  We left the bucolic Shenandoah Valley to sell air conditioners in Atlanta, which turned out to be a wise move.  Howell’s first exposure to Midtown was coming down to see events at the Fox Theatre.  One of the great footnotes of Howell’s life is that his date to the senior prom was one of the high school students who helped keep the wrecking ball off the Fox in 1974.

By 1987 Howell had finished graduate school, and his spirits rose considerably when he moved out of his parents’ basement and into an apartment on 12th St right on Piedmont Park (since demolished).  The neighborhood was ripe with new friends, many of whom still live in Midtown or intown today.  Howell especially enjoyed the quality of life on 10th St during the 90’s, including such diversions as picnicking in the park and rebuilding a car engine on his kitchen table.  Sadly, the latter hobby was ended as part of his verbal prenuptial agreement.

Howell is a retired architect who works as a volunteer for several non-profit organizations.  He is co-chair of the Property and Administration team at Druid Hills Presbyterian Church, where he recently oversaw the renovation of the sanctuary.  He currently serves as Board President of the Atlanta Preservation Center, Atlanta’s primary agency for education and advocacy of historic preservation.  At Paideia School, where Elliott is in 6th grade, Howell serves on the building committee and is a former trustee.  Paideia has completed five major building and renovation projects in the Druid Hills Landmark Historic District over the last ten years.

Howell was elected to the MNA Board two years ago, and it has been very meaningful to get more involved with the neighborhood.  Howell and Elizabeth opened their home to the Midtown tour of Homes in 2013 and the Garden tour in 2014, and volunteered in the recent 2014 tour.  Currently, Howell is involved with the committee which is exploring the possibility of Midtown becoming a local Historic District.